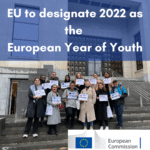 Youth, at the heart of the European agenda for 2022

On Monday, December 6, the Council and the European Parliament provisionally agreed on a decision to make 2022 the European Year of Youth.

This decision follows the proposal of the President of the European Commission, Ursula von der Leyen, to put the spotlight on youth in 2022. Young people have been particularly affected by the health crisis, which has led to the closure of schools, the cessation of extracurricular activities, and difficulties for young people to get together. The European Year of Youth is intended to pay tribute to young people and their efforts to overcome the crisis.

OCTA welcomes this decision, which is fully in line with OCTA’s new strategy for 2021-2027, unanimously adopted by its members on 1st December at an Extraordinary Ministerial Conference. Through its third strategic pillar “Cooperation in Strategic Areas” and its sub-pillar “Youth, Education and Culture”, OCTA intends to increase the participation and engagement of OCT youth in activities implemented by the association – such as the OCT Youth Study Week, launched in 2021 – and in the framework of EU-OCT partnerships, for example through the participation of OCTs in EU programs and projects open to their participation such as Erasmus +, the European Solidarity Corps, etc.

The European Commission estimates the budget allocated to the implementation of the European Year of Youth at 11 million euros. However, the provisional agreement reached between the Council and the European Parliament on this proposal still needs to be approved by both institutions, ideally by 1st  January next year, before it is implemented.