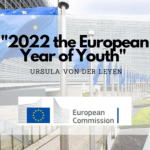 On Thursday, October 14, the European Commission published its proposal to make 2022 the European Year of Youth with the overall objective “to work together [with the youth] to shape the future of the European Union”, notably in a post-pandemic context as the pandemic has “robbed young people of many opportunities”.

Through several initiatives, such as the organization of events by and for young people, the allocation of funding, or the production of harmonized European statistics on the situation of young people in the Union, the European Commission intends to make 2022 the year of all opportunities for young people, especially for those from disadvantaged backgrounds or from vulnerable groups. As Agence Europe underlines in a recent article, the Institution also specifies that the green and digital transitions should be placed at the heart of this approach, which is fully in line with the achievement of Sustainable Development Objectives. In addition, this initiative will be supervised by national coordinators appointed by each of the Member States.

The European Commission estimates the budget allocated to the implementation of the European Year of Youth at 11 million euros. Talks on this subject are underway, as is the proposal, which will still have to be approved by the Parliament and the Council of the European Union, ideally by 1 January next year, before being implemented.