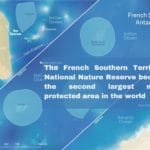 On the occasion of the One Ocean Summit, held in Brest (France) from February 9 to 11, the President of the French Republic, Emmanuel Macron, announced the extension of the French Southern Territories National Nature Reserve to cover all the maritime areas of the Crozet and Kerguelen archipelagos and the islands of Saint-Paul and Amsterdam.

With 1.6 million km2, this reserve located in the south of the Indian Ocean becomes the largest marine protected area in France, and the second largest in the world.

This extension of nearly one million km2 is one of the key measures of the French National Strategy for Protected Areas 2030, and allows France to exceed the target of 30% of French maritime and terrestrial areas in protected areas.

This measure also highlight the richness of the exceptional natural heritage of the French Southern Territories, which harbor a rich biodiversity, representative of the biological diversity of the Southern Ocean. For example, there is the world’s largest population of king penguins, and the second largest population of elephant seals.  The French Southern Territories also represent the migration route of Antarctic blue and pygmy whales, as well as  the reserve of a great diversity of endemic or sub-endemic birds. Finally, these areas also act as carbon sinks, thus contributing to the climate balance.

You can also contact Andrei Moarcas, Environment and Energy Adviser at OCTA: andrei@overseas-association.eu