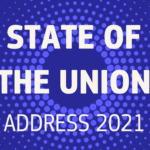 State of the Union Address 2021

The President opened her discourse with a reflection on the EU Approach to the COVID-19 health crisis. She proudly announced that Europe is among the world leaders in its vaccination campaign, having delivered more than 700 million vaccine doses to the European People, and another 700 million doses to more than 130 countries over the whole world. The EU will continue its vaccination efforts in Europe as well as worldwide while strengthening its pandemic preparedness.

Furthermore, particular focus was laid on the Green Deal and the Commission’s ambition to meet the set environmental targets. The president mentioned that the Commission has turned the target of 55% reduction of carbon emissions by 2030 into legal obligations thus making the EU the first major economy to present comprehensive legislation on carbon emissions. In addition, the Commission is aiming to make the EU economy more sustainable through the Green Transition.

In addition, the president paid particular attention to the EU’s priority areas, and underlined initiatives the Commission plans to undertake the following year, including plans to lead the EU Digital Transition, ensure fair working conditions in the EU, create more opportunities for the European Youth and strengthen the EU’s partnership with its close allies.

The President drew inspiration from Italian Gold-Medalist of the Paralympic Beatrice Vio’s belief that “If it looks impossible, it can be done” and concluded her address with an inspirational message, encouraging the members to be inspired by all the young people “who change our perception of the possible, who show us that you can be what you want to be, and that you can achieve whatever you believe”. This message is namely in true spirit of the EU’s ambition to make 2022 the year of the European Youth.

The full address can be accessed here: State of the Union 2021 | European Commission (europa.eu)