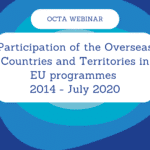 Following the publication of the latest OCTA report on the participation of OCTs in EU programmes, a webinar took place on the 24 March 2021 to present the main conclusions of the research.

It was the opportunity for OCTs, the European Commission and Members of the European Parliament to discuss OCTs increased awareness and relevance, their involvement in the EU family and OCTA’s professionalisation and aims.

Mr. Edmond Paris, President of the OCTA Committee, recalled that in the 70s Mr. Henry Kissinger asked the famous question “Who do I call if I want to speak to Europe?”. OCTA’s objective is precisely to raise awareness on opportunities offered by the EU, which is growing, and the Association is professionalising with more staff within the Secretariat, thanks to the cooperation of the members and the European Commission.

Ms. Sylvie Millot, Head of the Unit ‘Relations with OCTs’ (DG INTPA) congratulated OCTs for their successes and the OCTA secretariat who contributed to it. EU programmes are a way to implement EU policies on the ground and with the new period it is important to mention the new priorities of the EC such as the green deal, digitalization, sustainable growth and job. There was a big effort to clarify and avoid uncertainty about OCTs eligibility in the legal instruments. She concluded by saying that if OCTs do not know who to call in the EU they can always call her and she will always try to help.

Mr. Stéphane Bijoux and Ms. Samira Rafaela, Members of the European Parliament, emphasised that the OCTs belong to the EU family and can offer opportunities for the EU. For the next period, there will be an increased participation of OCTs, there is the possibility of a win-win relationship. Together they have founded, within the European Parliament, the Friendship Group for the OCTs.

Mr. Pablo Lopez-Herrerias, Coordinator of the OCTA Secretariat, thanked the EC for bringing huge support to OCTs. The EU has its MFF and OCTA has its MFF with Marta Fernández Fornieles who worked hard to make sure that OCTs can access projects.

Ms. Marta Fernández Fornieles presented her report on OCTs participation in EU programmes, the second edition of this OCTA report, which provides a detailed overview of the interest of OCTs in European initiatives. The key messages include the significant increase of projects, the strengthening of OCT-EU networks and the stronger support of OCTA to OCTs.

Ms. Monika Paulli Andersen, Secretary of Embassy at the Greenland Representation in Brussels, expressed Greenland’s appreciation for the report which indicates that participants are gaining experience. This report is a clear example of why OCTA matters, and what kind of benefit the association can deliver to the OCTs.

Mr. Edmond Paris closed the webinar expressing OCTs gratitude as the fruits of the efforts of the Members of the European Parliament, the European Commission and OCTA are clear.

OCTA has printed copies of the report, please contact Marta Fernández Fornieles at marta@overseas-association.eu if you would like to receive one.

The digital version can be found here: OCTA Report