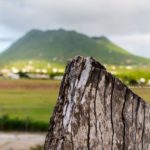 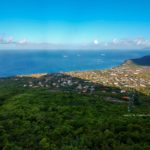 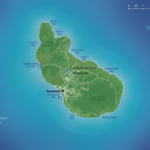 The official languages are Dutch and English. 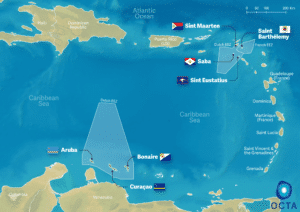 Sint Eustatius
in a few numbers 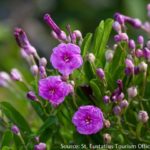 St Eustatius is a volcanic island with three different landscapes. Volcanic landscapes dominate the northwest and southeast. These two landscapes are distinguished by sloping northern plains. To the north the landscape is hilly from the highly eroded remains of five extinct craters. The middle of the island is mostly flat, this is where the airport is located, while the island’s southeast side is dominated by the dormant volcano “The Quill”. The coast of St. Eustatius consists mainly of steep cliffs with several bays, populated by small sandy beaches.

The island has a tropical climate which ensures that Statia is green all year round, with an ever-blowing breeze. The average daytime temperature is 27 °C and the average night temperature drops to 24°C. Rainfall occurs in showers in April, June and September. The island is located in the hurricane belt. The island is home to more than 35 globally endangered or vulnerable species including trees, snakes, sea turtles, birds, whales and fish. There are coral reefs, seagrass beds, rain forests, cactus and woodlands. The flower called Morning Glory has become a symbol of the island.

The Netherlands Antilles ceased to exist with the constitutional reform of 2010. As a result, Curaçao and St Maarten became countries within the Kingdom while Bonaire, Saba and St. Eustatius (BES islands) became special municipalities of the Netherlands who the Dutch government are responsible for. The executive power of the Public Entity of St. Eustatius rests with the Island Council, which is headed by an Island Governor, and is responsible for that island’s day-to-day governance.

The economy of St. Eustatius is primarily based on the government, oil-transhipment, tourism, commerce, harbour activities and the medical school. The source for prosperity is mainly based on export based activities, of which Nustar Terminals and its suppliers are the most prominent. The company became operational in 1982, and offers direct employment to 140 islanders.

In addition, the island has a modest tourism industry, mainly diving as Statia is a virtual “gold mine” for divers. There is no mass tourism and the island leans more toward ecotourism. The St. Eustatius National Parks Foundation (Stenapa) is responsible for managing many ecotourism initiatives. Stenapa is a dedicated environmental organisation developed to protect the marine/land environment and to protect and monitor endangered species.

Following Hurricanes Irma and Maria, the island has revaluated its strategies to prepare for and recover from energy, water and food system outages solar energy covers. As a result, 46% of St. Eustatius’ total electricity need is now covered by solar energy.

Sint-Eustatius is increasingly taking part in EU programmes. So far, it has been successfully involved in Erasmus+, BEST2.0 and Interreg.