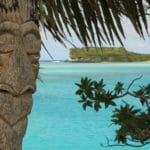 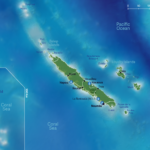 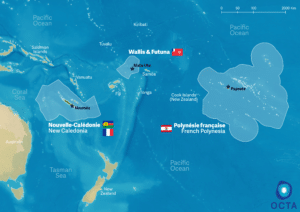 New Caledonia
in a few numbers 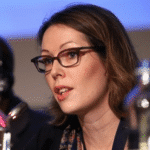 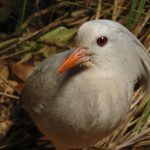 The New Caledonian archipelago mainly consists of Grande-Terre (16,374 km²) oriented along a northwest-southeast axis, the Pine Island (150 km²) in the South; the Belep archipelago (70 km²) in the Northwest and the Loyalty Islands (Lifou, Mare, Ouvea and Tiga) covering 1,981 km in the East. Grande-Terre is characterized by a central chain which rises to 1,629 meters with rounded peaks and steep-sided slopes, separating two asymmetric sides, the eastern slope being steeper. The Loyalty Islands, with a low and flat relief, are old, unevenly raised coral atolls.

The climate is tropical with a warm and wet period (November-March) and a cool period (June to August). The climate is moderated by a flow of trade winds. Annual temperatures vary on average from 22 to 25 ° C. Humidity ranges between 73% and 81%.
Its flora is rich, with the endemism rate of its plants estimated at 76%. The cagou is the emblematic bird of New Caledonia.

New Caledonia has a special “sui generis” status as defined by Title XIII of the French Constitution, which provides for an organisation adapted to its own identity constituting an original model, invented to define a shared sovereignty with France. The organisation of New Caledonia is laid down in Organic Law No 99-209 of 19 March 1999, arising from the Noumea Accord. Its citizens are French citizens.

New Caledonia’s institutions are: the Congress, the Government, the Customary Senate, the Economic, Social and Environmental Council and the Customary Councils. France is represented by the High Commissioner of the Republic.

In New Caledonia, the State is competent in the matters listed exhaustively in Article 21 of the Organic Law, and in particular the control of immigration and foreigners, money, the Treasury, foreign exchange, national defence, justice, the civil service of the State, the maintenance of law and order and higher education and research.

The High Commissioner of the Republic is the depository of the powers of the Republic and represents the Government. New Caledonia shall be represented in Parliament and in the Economic and Social Council of the Republic under the conditions laid down by the organic laws.

The Customary Senate, the Customary Councils and the Economic, Social and Environmental Council (CESE) are the other institutions of New Caledonia. The first two are consulted on texts relating to Kanak identity, and the EESC on economic, social and cultural matters.

The three provinces, South, North and Loyalty Islands, are constituted as provincial assemblies (40 members, 22 members and 14 members respectively) and are elected by universal suffrage for a period of five years and have competence in all sectors not attributed by law to the State, New Caledonia and the communes.

The provinces and communes of New Caledonia are territorial communities of the Republic. They are freely administered by assemblies elected by direct universal suffrage.

The country’s main economic activities are nickel mining and metallurgy, services, tourism, fisheries and aquaculture of shrimp, as well as a local industry, including in the area of food-processing.

A land of contrasts, New Caledonia, seeks to reconcile the exploitation of its mineral resources with the protection of its unique biodiversity. In the context of sustainable development, the “mineral resources development scheme”, adopted in 2009, provides tools to ensure respect for the environment: the National Center for Research and Technology (CNRT) on nickel, a Charter of good mining practices, and the Mining Code.

The energy mix of New Caledonia’s electricity production is still largely dominated by fossil combustibles (fuel oil, coal) but the New-Caledonia government has shown high ambitions in the energy transition towards renewable energies. In 2016, the Energy Transition Plan (STENC) was adopted. The STENC sets out the objectives by 2030 for reducing energy consumption and greenhouse gas emissions in New-Caledonia, as well as for developing renewable energies.

New Caledonia is increasingly taking part in EU programmes. So far, it has been successfully involved in Horizon 2020, Cosme, Erasmus+, BEST2.0 and European Solidarity Corps.

President of the Government of New Caledonia

Louis Mapou is an indigenous Kanak from the pro-independence coalition born on 14 November 1958 in Unia, Yaté, south of New Caledonia. A member of the Kanak Liberation Party (Palika), he is president of the National Union for Independence group (UNI) in the New Caledonian Congress since 2014.

Louis Mapou studied human geography at university in Nantes and then in Paris in the 1980s. After a stint at ORSTOM (now IRD), he joined the Rural Development and Land Management Agency and became its Director General. He served in this position from 1998 to 2005. Between 2005 and 2014, he was director of Eramet, chairman of the board of directors of Koniambo Nickel and director of Sofinor, the commercial branch of the Northern Province. A member of the Southern Province, he was also a municipal councilor of Païta from 1989 to 1995 and is currently serving in this position since 2020.

Elected President of the Government of New Caledonia on 8 July 2021, he becomes the first pro-independence leader to assume this position under the status of the Nouméa Accord. As the presidency of OCTA is held by New Caledonia, Mr. Mapou is additionally the OCTA Chair.