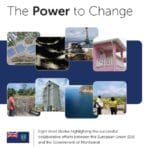 The Government of Montserrat has released a booklet highlighting the EU-Montserrat achievements under the European Development Fund (11th EDF) programme. Monserrat, a former member of OCTA, was an Overseas Territory of the European Union until the withdrawal of the United Kingdom from the EU in 2021. Currently, OCTA continues to work closely with them, in the framework of a Memorandum of Understanding signed between the UK Overseas Territories Association (UKOTA) and OCTA.

Montserrat has enjoyed a positive development partnership with the European Union (EU) for decades. Following the last EU-Government of Montserrat consultations, EC$57.35 million (€18.72M) were allocated under the 11th EDF for the period 2014-2020. These funds have been devoted to projects that promote Montserrat’s sustainable economic development.

The booklet titled “The Power To Change” has received funding from the European Union.  The publication includes remarks from the Premier, Hon. Joseph E. Farrell who used the opportunity to thank the EU: “On behalf of the Government and people of Montserrat, I would like to express our gratitude to the European Union (EU) for the excellent cooperative relationship we have enjoyed over the years... As an island and as a people, we are honoured to be a part of a valuable and positive global development programme, benefiting from several generations of funding under the European Development Fund (EDF).”

The booklet details eight important infrastructure projects, read about them in the The Power To Change Booklet.