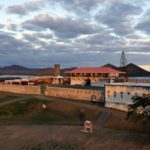 The association owes its name to the Marguerite Footbridge spanning the La Foa river. This splendid metal bridge, built at the beginning of the 20th century, threatened to disappear after its abandonment. In 1981 few Lafoyans decided to put everything in place to give this building its former glory. Thanks to them, Fort Teremba de Moindou was classified as a historical monument in 1989.

The association was created, with the goal to maintain and rehabilitate the historic patrimony of the LaFoa and Moindou districts. The site offers a discovery of the history of the penal colony and of the Kanak uprising of 1878 through its permanent exhibition.