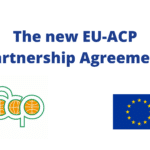 The 15th of April, Commissioner for International Partnerships Jutta Urpilainen and Togo’s Foreign Minister Robert Dussey, initialled the new partnership agreement between the European Union and the members of the Organisation of African, Caribbean and Pacific States (OACPS, formerly known as the ACP Group of States). This marks the formal conclusion of the negotiations of the post-Cotonou agreement, setting the political, economic and sectorial cooperation framework for the next twenty years.