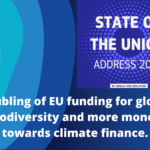 On the issue of climate, the EU legislation has set the ambition of climate neutrality by 2050. The climate and environmental crisis were key points in the state of the union speech of the President of the European Commission Ursula von der Leyen on Wednesday, September 15, in the European Parliament.

“Europe can do a lot. And it will support others. I am proud to announce today that the EU will double its external funding for biodiversity, especially for the most vulnerable countries,” said the Commission President.

The EU will therefore redouble its international efforts for climate, environment and biodiversity conservation. However, Ursula von der Leyen also called on the EU’s partners to redouble their efforts, particularly the United States, calling COP26 “a moment of truth for the whole world”.

The German also pleaded for countries to establish concrete plans to achieve their climate objectives before COP26, mentioning the United States, Japan, but especially China. China has a similar target for 2060.

Environmental initiatives will focus on the implementation of the EU’s Zero Pollution Action Plan and the second action plan for the circular economy. The Commission is announcing several innovative and unique legislative proposals for the European Union.

Read the State of the Union address here.