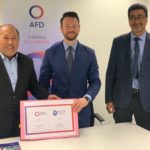 French Agency of Development (AFD) & OCTA enter into a partnership

On Tuesday 5 April 2022, the Agence française de développement (AFD) and OCTA have signed a Memorandum of Understanding (MoU) with the objective of working together on their strategic priorities and implementing joint actions in their sectors of intervention at the regional level.

The AFD is a public establishment and a financing company, with headquarters in Paris. It is part of the French official development assistance system. It operates in more than one hundred countries in Africa, the Pacific, Asia, the Caribbean, the Indian Ocean, the Mediterranean, South America and Eastern Europe, as well as in the French Overseas Departments and Territories. As part of its mandate in French Overseas, AFD is strengthening its support for projects that contribute to climate change mitigation and adaptation objectives.

In this context, the partnership between OCTA and AFD will be led by the AFD’s Department of “Three Oceans”, which works in the Pacific, Atlantic and Indian Oceans, where the collaboration with the Outermost Regions and the OCTs is key in developing integrative projects.

OCTA is looking forward to the implementation of this partnership, which will continue to strengthen the capacity of the OCTs in a sustainable way. Our joint actions will focus on the ecological transition, the Green Deal, as well as actions related to youth, and regional integration and connectivity.