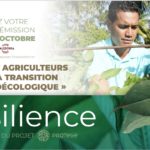 The “Resilience” TV show has been created by the Protégé project – an EU funded initiative implemented by the Secretariat of the Pacific Community, supporting the public policies of the European Overseas Countries and Territories of the Pacific (OCTs).

The TV show aims to popularize and make the actions, the stakeholders and the beneficiaries of the Protégé projects known to the people of the European OCTs of the Pacific, as well as to the other countries in the region and in Europe.

Structured in two parts, the TV show includes a 13-minute report followed by a discussion with the project’s stakeholders who will bring a regional perspective (both from the regions covered by the report and from further afield). Its goal is to promote regional cooperation by mixing actions carried out in OCTs – such as New Caledonia, French Polynesia and Wallis & Futuna.

The series includes 13 episodes, which address the 4 components of the project. It is broadcast in French and in English. The show airs on Caledonia TV, TNTV (PF), WF 1ère and SPC’s Pacific Way channel in 20 English-speaking Pacific countries. The first episodes will cover:

The series can also be followed on the dedicated YouTube channel: https://www.youtube.com/playlist?list=PLCq-WnF3HdrjkSwcmAiva62Ed2OfbyBJm