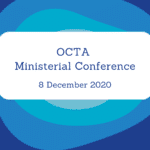 The 8th of December, the OCTA Ministerial Conference took place virtually and was hosted by Curaçao.

OCTA members discussed the impact of the crisis in the OCTs, during this last year of implementation of the 2013 Overseas Association Decision (OAD), the upcoming revised partnership for 2021-2027 and the impact of Brexit.

The 22 members of OCTA attended and the Political Declaration was adopted.

Mr. Thierry Santa, the President of the Government of New-Caledonia, was elected as OCTA Chair.