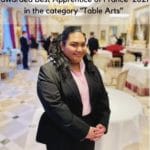 French Polynesia, the rising star of the Table Arts

On Wednesday, the Parisian palace Le Bristol hosted the final of the “One of the best Apprentices of France” (MAF) competition in the” table arts” category: a historic edition, as underlined by the specialized media «Un œil en salle », which rewarded 7 young people, including the Polynesian Kylie Teivao.

Student in 1st year of BTS in hotel management and food service at the hotel school of Punaauia, Kylie Teivao won the gold medal after a series of 9 tests as varied as meticulous, such as the realization of a floral decoration for a centerpiece, the creation of a cocktail, an oral test of job interview, or the recognition of 5 cheeses of controlled origin (AOP). A few days earlier, the young Polynesian Juliano Hiriga also won this prestigious competition in the “cold cuisine” category.

The MAF was created in 1985 on the initiative of Paul Labourier, Meilleur ouvrier de France. This competition of excellence, which has a strong influence in France and beyond, is a source of motivation and rewarding future prospects for young people in metropolitan France and overseas.

At the overseas level, the Trophy Table Art competition, founded and organized by the chef Béatrice Fabignon, is a travelling competition of excellence. It honours the table arts, service and gastronomy, with the following objectives: to enhance the value of the hotel and restaurant industry, the food industry and the service industry; to encourage exchanges, employment and training for young people in the overseas territories; and to promote local products and tourism in these territories. Trophy Art Table already made 4 stopovers in Martinique, French Guiana, Reunion and Guadeloupe, and has the ambition to extend to the overseas countries and territories. For 2022, stopovers in Saint-Pierre-et-Miquelon and French Polynesia are in preparation. A final edition will take place in Paris with all the winners of the different stopovers.