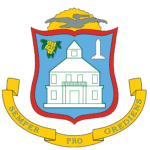 Sint Maarten is one of four autonomous countries that form the Kingdom of the Netherlands (Aruba, Curaçao, the Netherlands, St Maarten). The island is divided in two, Saint Martin (French) and Sint Maarten (Dutch) and is the smallest landmass in the world shared by two independent states, France and The NetherlandsThe official languages are Dutch and English. Sint Maarten is located in the North Eastern Caribbean approximately 140 miles from Puerto Rico. Its surface area is 41 km2 and its population 40 614 (2018).